By Katerina Pouliasi, written for ‘The Inquisitive Mind‘ 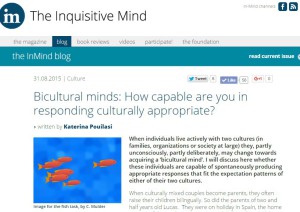 When individuals live actively with two cultures (in families, organizations or society at large) they, partly unconsciously, partly deliberately, may change towards acquiring a ‘bicultural mind’.

I will discuss here whether these individuals become capable of spontaneously producing appropriate responses that fit the expectation patterns of either of their two cultures.

When culturally mixed couples become parents, they often raise their children bilingually. So did the parents of two and half years old Lucas. They were on holiday in Spain, the home country of the mother, when a Spanish kid used a word that Lucas didn’t get. He asked him:

“How does your mom say it?” The other boy just repeated the same word. So Lucas got a better idea:

“And, how does your papa call it then?” The other kid once again repeated the same word. Lucas was very puzzled, ran to his mom and, pointing towards the boy, reported loudly:

“Mom, that boy’s mom and papa talk the same”!

A cute and true story! But, what might be less realized, is that by switching between mom’s and dad’s ‘talk’, Lucas does not merely perform in bilingualism, but in bicultural competence as well. As we discuss bellow, language has been used as a tool to activate culture.

Children learn to attach meaning to words and over time perceive the more abstract insights of the world around in the language and the way adults, or later on peers, in their environment do it. This is a penetrating, mind immersing and largely unnoticeable process. All taken for granted, until… moving to another country with another culture and language.

Not before Eva Hofman had moved from Poland to Canada, would she notice in astonishment,

“River in Poland was a vital sound energised with the essence of riverhood, of my rivers, of my being immersed in rivers…
River, in English, is cold, …is a word without an aura… a word that does not evoke…

’Nicely said. For all of us, whatever a word or concept evokes, it has arisen in the culture of our childhood. Transplanted to another culture, the same word in the new language lacking memories evokes emptiness! Did it change?

Culture, affects greatly the ways we tend to think, feel and behave spontaneously.When culture A informs, for example, the mind in a holistic way, people will, most likely, reason the behavior of an actor by thinking of his/her relationships and position in a given environment. But in a culture B, where analytic thought prevails, people tend to focus attention on the actor himself and his/her internal characteristics.

An intriguing question then is: which reasoning will a bicultural individual provide for the same actor in the same scenario when in the A or in the B cultural context?

Research on biculturalism has been greatly inspired by the seminal work of Hong, Morris, Chiu and Benet-Martinez (2000), who first tested the hypothesized cognitive ability to switch between holistic and analytic thought among Chinese-American students in the United States.

A key feature in the approach of Hong and colleagues is that individuals are able to internalize dual cultural systems, even if these systems contain conflicting information on the same topic. But, naturally, conflicting pieces of information cannot guide thought simultaneously. They also argued that culture should no longer be considered as a single whole, but rather as a domain specific knowledge, e.g., family values, work-related values.

We conventionally call individuals who live in ‘own’ culture ‘mono-culturals’. In contrast, bicultural individuals are those who actively live with two cultures. e.g. in mixed couples or between family and organizations or society at large.

An experiment on biculturalism in Europe

In research we published in the JCCP (Verkuyten & Pouliasi, 2002), we studied the same questions with Dutch-Greek bicultural kids between 9 and 12 years old, who lived in the Netherlands and were fluent in both their languages.

We randomly assigned the children either to a Dutch or to a Greek cultural situation, ’manipulated’ with cues like cultural symbols and the corresponding language. A typically Greek  and off-course Mediterenean symbol is a brounch of olive tree, and a typical Dutch one, a tulip.

Cognitive research has shown that cues in the environment activate information in one’s mind, which is relevant to the origin of the cues.

One of the various tasks, for those set in either condition, was to interpret an ambiguous non-human behavior, the so-called fish task. To all children we have show  an image of a fish swimming in front of a school and asked them the same, namely, 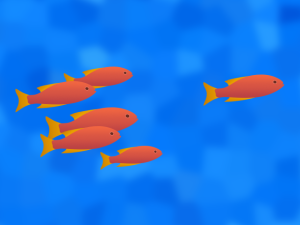 ‘Why the one fish is ahead’?

They could choose answers in a holistic style, meaning looking at the whole picture and seeking the relationships like,

‘because the other fishes are chasing it’,

‘he is their leader’

and/or choose an answer in an analytic way, meaning, thinking of the fish own characteristics like,
‘because the fish ahead is a better swimmer’ or

‘he is the strongest’.

The same cognitive flexibility was observed in Asian-American biculturals. A key point in all these studies is that bicultural individuals switch thinking spontaneously to respond appropriately to either salient cultural situation. This is a skill obtained naturally through experiencing more than one culture (mixed families, between family and society at large).

By actively participating in a new culture, our mind receives new feedback. This can be complementary cultural knowledge, and does not have to replace that encoded originally in our mind in our primary culture.Athanasopoulos and colleagues (2015), who performed similar experiments with English-German bilinguals, from a linguistic perspective, have reached congruent conclusions.

These bilinguals also switched spontaneously between analytic and holistic thinking when asked to describe a photo. In the English language the focus of attention was on the action itself (e.g., “He is cycling”). In the German language (lacking this continuous verb form), attention was diffused between the action and the goal, (e.g., “He cycles towards the supermarket”).

There is of course important variation in how individuals react to new cultural input and how they manage behavior which deserve a future discussion on the role of individual factors.

Yet, being able to exhibit cognitive flexibility is a newly appreciated skill, slated to be assessed by the 2018 PISA modules proposed by OECD, next to language and math skills. This recognizes a new priority, to meet the emerging needs of the global mobility and the economic and social developments in our century!