We have asked employees, IT specialists, who work for Telecommunication companies in Greece and in the Netherlands and cooperate from distance the following question:

‘Can you think of something your counterparts in the Netherlands (or in Greece) are doing well? Something you would like to adopt within your company as well?’

These participants communicate daily or weekly with their counterparts in the other country. The majority of the responders in the Netherlands were Dutch but a 30% comes from Belgium, Denmark, Hungary, Bulgaria, Ireland, Portugal, Romania, China and  Greece. From Greece all were Greeks, except for two Bulgarians.

A semantic classification of the comments

The responders refer to a large range of topics. Most likely, what one impress may really matters to them!. Two bicultural coders worked together to group the comments per category. Apart from the greetings, please and thank you expressions which we allocated in a category named ‘Greetings’, we cluster the other comments per sector, yet what the Dutch or the Greeks ‘see’ may vary in perspective or per entity involved. Some see what they lack in ‘own’ environment others, what they admire in the ‘other’ side, embrace as valuable or viewed as worthy for adoption.

The largest percentage we discerned on behalf of the Greeks comprise 29,7% of their total observations and it is related to the ‘working environment’.  Dutch on the other hand, mention less or nothing related to a working environment in Greece. Most of them (29,7%) notice a friendly Greek behavioral style.  We assigned these observations under the category ‘Agreeability’.

The following two radar charts show the semantic categorization we concluded and are presented per national group.  In the tables below, we add some of the characteristic comments provided. 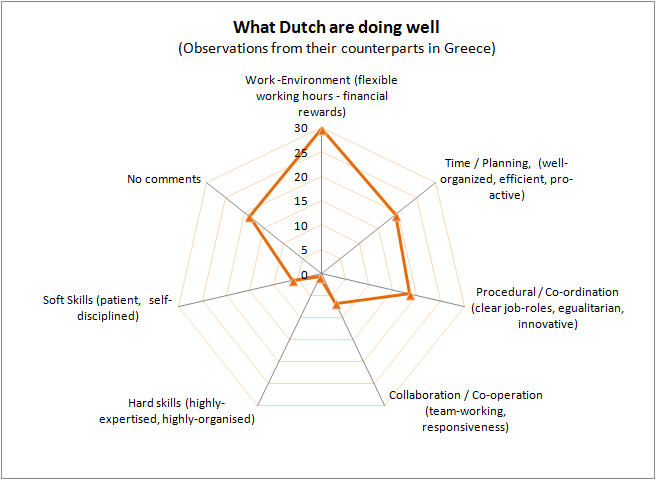 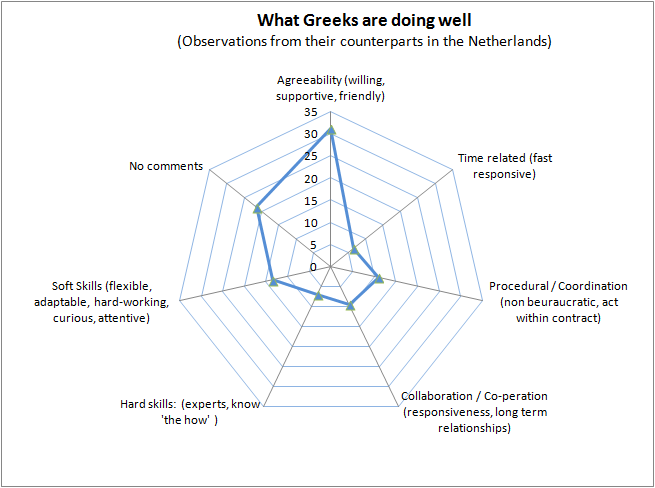 Table 1: According to the Greeks in Greece

Table 2: According to colleagues in the Netherlands

According to the employees in the Netherlands (Dutch was the major group).

Employees both sides often observe different sides on each category.

For example, in the ‘Time / Planning’ related category Greeks notice how effectively Dutch go on with time and coordination of activities within the company whereas employees in the Netherlands ‘see’ the individual Greek in Greece: ‘Greeks respond fast, especially in cases of urgency’.

Dutch furthermore, figure out how pride-minded and sensitivity to being respected by them (the Dutch) Greeks are apart from being co-operative (when …respected also notice!). Most of the remarks refer thus, to the Greek as individual.

Greeks on the other hand, admire a clear distinction of roles in companies, fearless attitude to hierarchy, self-discipline, task focused attention,  effective time-management. Hence, comment on the Organization and the individual level as well.

There is also another way to look at these results, namely as one realise during a discussion in our workshop this:

When I notice what the ‘other’ is doing wel, may well indicate a shortcoming  in ‘me’ or ‘my’ organization. Which, turns out to be very inspiring and motivating towards changes!

I am honored and proud to discuss such dynamic exchange of views and also how such valuable experiences can be utilized and transformed to Intercultural Competence!

(In previous and upcoming SIETAR conference)