Culture is the way you speak, you move, you approach or react to others. In short, the ways you communicate yourself. Culture is “embodied” in you. Let’s make it clear with two stories.

Ellen recently moved from South Europe to Holland and works for a company in Amsterdam. She eagerly told me her story: One day, at the end of their working hours, she asked her colleague Dirk, whom she considered a nice person, in an easygoing and lively way:

To her big and nasty surprise Dirk replied in clear discomfort:

‘What a #@%!’ man!” she still repeats in astonishment! What I meant was just a chat after work! Obviously, what Ellen experienced as an ‘offensive rejection’ was not just due to the Dutch custom of early dinners.

Esmeralda came from Spain. One day, on arriving at her workplace, a large international IT company in Amsterdam, she whispered to Petra, a colleague whom she was hoping to befriend,

said she, with a sparking look full of hints

I thought we were somehow closer together”, is what Esmeralda years later relates about this episode. For her, you can make such a teasing remark to someone you consider close. It is just a way to initiate an intimate a more personal chat! ‘You do that with people you feel close not with every one off-course’! she mentioned. Esmeralda has, in the meantime, moved to France but, as she recalled, she never really found the way to feel at home in the Netherlands.

In both the stories, all parties involved ended up being irritated. The two ladies, contrary to their expectation, 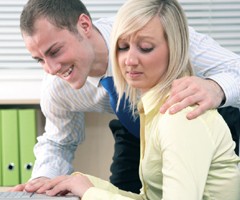 The culture we are raised in has imperceptibly inform our behavior on what may be appropriate or normal or what are the kind of values we tend to prioritize in our lifes! The two cases show that:

It is thus not just  a matter of misunderstanding the other’s intention? But, about how culture informs our behavior and the values we prioritise in life?

For the Dutch or other individualist societies (USA, UK, Scandinavian, Australian, ..) personal proposals at work may imply flirting and, separation of personal and professional life is a well-known norm. In the Dutch society, ‘undesired touching’ at work can be considered as ‘sexual intimidation’, and is even protected by law. Whereas in the Southern European contexts barriers between work and personal life are not so sharp and physical or emotional intimacies feature regularly in people’s behavior.

What  friendships means to you?

What people desire, both in heart and mind in more Collectivistic cultures, are stable and loyal friends. Friendship is a highly appreciated in these cultures. A young girl who lives in Greece writes characteristically:

(Quotation from a high school e-magazine)

In these cultures, daily routines aim at enduring and loyal relationships of ‘kith and kin’.  People are embedded in close relationships. For many people, personal identity depends on ‘their’ relationships. Comparative research has demonstrated that even self-confidence increases when among good friends, which is not observed for the members of more individualist cultures (e.g. Dutch, Australian)

Comparing to the Dutch expectations

In cross-cultural psychology, we study how people understand their ‘Self’ in relation to ‘Others’
Adolescents with a Collectivistic cultural background, in the Netherlands, shown to appreciate sharing their most personal feelings with and receiving emotional support from friends significantly stronger than their Dutch counterparts (2). Another important difference is that people from individualistic do not mind talking about their very personal issues with anyone even with strangers. 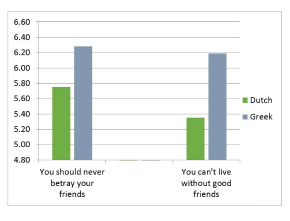 ips we have asked both subjects to evaluate strong statements about friends like:

Cultural comparison of attachments to family and friends reveal the  As the pioneer in Cross-Cultural comparative research, Harry C. Triandis et al. (1990), has concluded, emotional attachment to family and friends is one of the most important aspect in distinguishing cultures.
Our findings, illustrated in the diagram, just reconfirm the difference: Dutch individuals endorsed these aspects of friendship much less than the Greeks. Yet, in general and beyond cultures, the same may hold for women as compared to men (3) ( ‘Biculturalism and Group Identification‘, ).

The power of the environment

Our comparative study, however, aimed at investigating how expats, coming from a more collectivistic culture to the Netherlands feel and cope with the dominant Dutch norms and values. Present-day Dutch do not seek stability, loyalty and mutual emotional support in their relationships. They may even associate such traits with an unstable personality.

The two ladies in our stories mentioned above, by being as spontaneous as in ‘own’ cultural context, experienced plain rejection. It’s however so true! Confrontation with disengaging responses, is a clear and redirecting feedback: the harder you mind rejection the more you will think twice before showing the same behavior again.

Yet, it’s not only the desire to avoid rejection by other (4) that constrains spontaneous behavior (= culture) learned in home culture. These expats more or less realize that what for them represents an ‘ideal’ friendship is much less likely to flourish in the Dutch context.

However expats in our sample who have lived here in average 10 years, independently of  their integration in other personal traits like, efficiency or self confidence, have not changed their ideas about how friendship should be (answers of question 1). On the other hand, and this is due to the power of the environment,  ‘friendship’ no longer counts in their life as much as it used to when in own culture (estimated with questions like question 2).

The culture we are raised in inform thus the kind of wishes and expectations we have from our friends or our connections!

The attention these questions deserve is given in the second part of this article:

Friendships or Networks in the Netherlands? (part 2)

Sources for the research mentioned: